With in-form strikers at a premium at the Premier League’s biggest clubs, will Kylian Mbappe, Erling Haaland, Harry Kane or someone else be on shopping lists this summer?

Manchester City winning the Premier League is nothing out of the ordinary but if Pep Guardiola’s team do make it three titles in four years, it will likely come in unusual circumstances, and not just surrounding Covid-19.

The club has coped without main striker Sergio Aguero for most of the season, while back-up number nine Gabriel Jesus has scored only seven goals. Instead, their top scorer is central midfielder Ilkay Gundogan, who has netted 12 times – and Jesus will do well to catch him in the final weeks of the season.

A non-striker has only finished as the Premier League champions’ top scorer three times in history. It is seven years since Yaya Toure became the last player to do so, for City themselves, in 2014. Longer term, the winners’ top marksman has not finished outside the top five in the Golden Boot race since 2001.

Explaining City’s break with tradition on Monday Night Football, four-time Golden Boot winner Thierry Henry said: “It tells you the way they do it at Manchester City is the philosophy, the identity. The way they like to play, it doesn’t matter who’s in that team.

“They miss Aguero, De Bruyne has been out at times, Sterling hasn’t played at times recently; it doesn’t really matter. They have an identity, they have a philosophy, they win as a team.”

City’s transition from relying on a traditional number nine not unique this season. Of the current top four, only one out-and-out striker has scored more than 10 goals – and he is Leicester’s 34-year-old Jamie Vardy.

In the Champions League qualifying race, Chelsea have sampled playing Kai Havertz as their lone striker since Thomas Tuchel’s arrival, with Timo Werner yet to hit top form, and with Edinson Cavani’s contract up at Manchester United this summer, the race for a number nine could be well and truly on this summer.

So who will the Premier League’s biggest sides target this summer – and would they come?

It’s difficult to find the superlatives to describe Mbappe’s rise – at 22 he is already a World Cup winner, a Champions League finalist, and has scored 100 league goals for PSG with whom he has won three Ligue 1 titles, and may add a fourth this season.

Able to play either side of a striker or as a number nine himself, Mbappe is a dangerous opponent no matter where he is in the frontline.

“He’s got pace, he can play on the right, on the left, in the middle,” said Henry. “I think when he can run at you he’s at his best. Whether that’s in the middle and running in behind, or down the side.

“He knows his strengths. He knows what he can’t do. That’s not being in an uncomfortable zone for him. He knows he can play on the right, and the left. He can leave you for dead when he’s in the box, and he can finish.

“He’ll beat you. If you don’t attack him, he’ll run, give him space and he’ll turn on you. He’s very different from Haaland. His awareness, his goalscoring abilities, are second to none.” 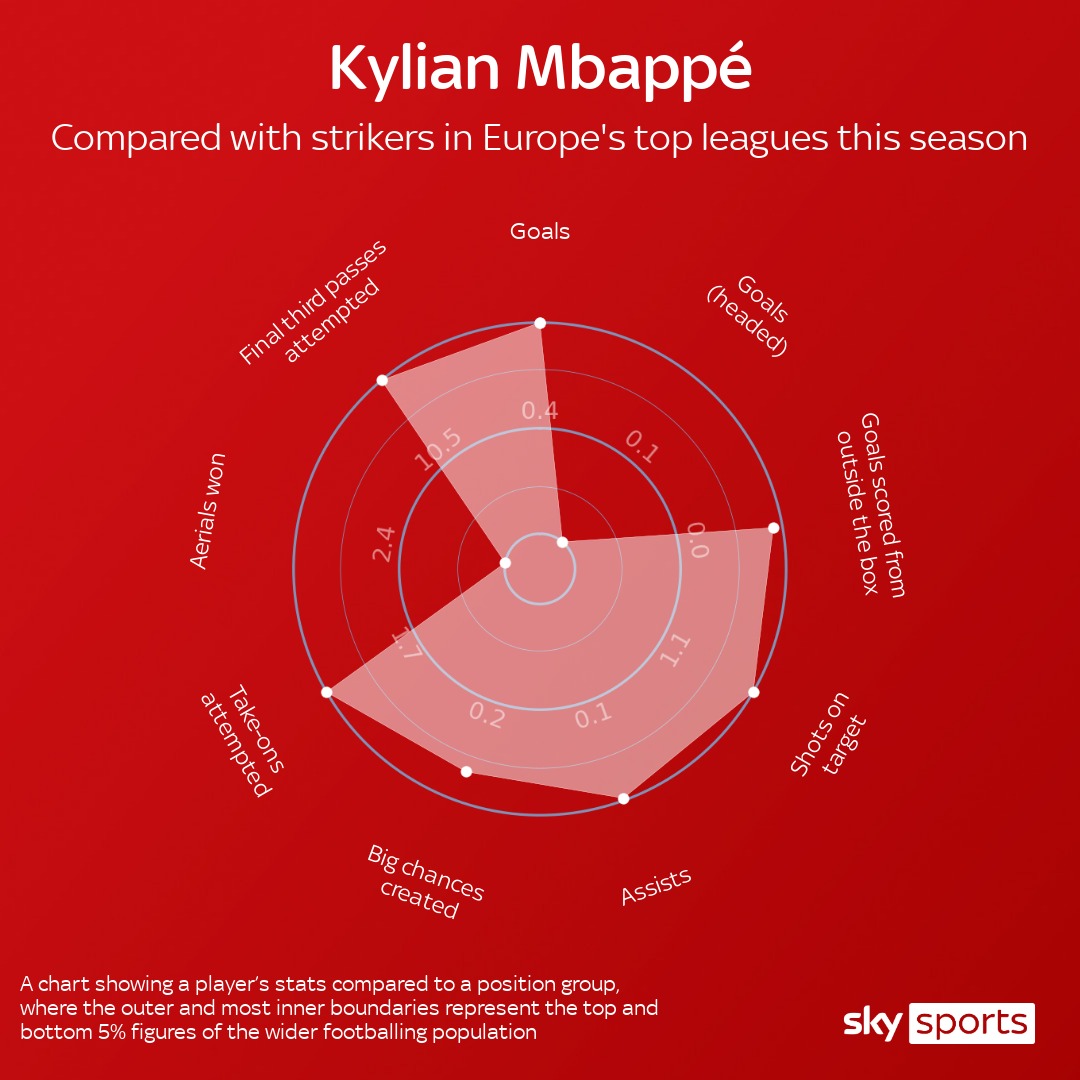 Is it time for Mbappe to move to a bigger league, or can he realise his dreams in Paris – who could yet lift the Champions League trophy for the first time this season?

“Kylian Mbappe is happy at Paris Saint Germain,” says Sky Sports News’ Dharmesh Sheth. “His words – not mine. That won’t change – provided he gets guarantees the club continues to strengthen on the pitch.

“Mbappe’s contract is up in the summer of 2022 and talks are ongoing over a new deal. Both the club and Mbappe know a decision will have to be made soon. If he decides against signing a new contract, then we could see one of the biggest ever transfers this summer.

“PSG can’t risk Mbappe running down his deal and leaving for free. We aren’t there yet, though… And PSG are ‘very confident’ Mbappe will sign. What’s more, Mbappe will be encouraged Neymar is likely to extend his stay in Paris too.

Mbappe knows time is on his side, aged 22. If he have aspirations to move to Spain or the Premier League, he can afford to be patient. Can the same be said for those chasing him?”

Haaland’s stock has arguably risen even faster than Mbappe’s, especially since his move to Borussia Dortmund in January 2020. In the 14 months since, he has scored 49 goals in 49 games for the German club, and become the youngest player to reach 20 Champions League goals in history.

“He doesn’t care about anything other than the goal,” said Henry. “Other players will go wide but he wants to stay in front of the net, between the posts, he knows he’s lethal there.

“You look at him and you think ‘oh yes, trouble.’ Straight away, he just wants to run in behind. The way he finishes is just ridiculous.

“The ability he has, he believes so much in himself. There is a bit of cockiness about him, if you can call it that. You have to look at people and say, I’m going to score. 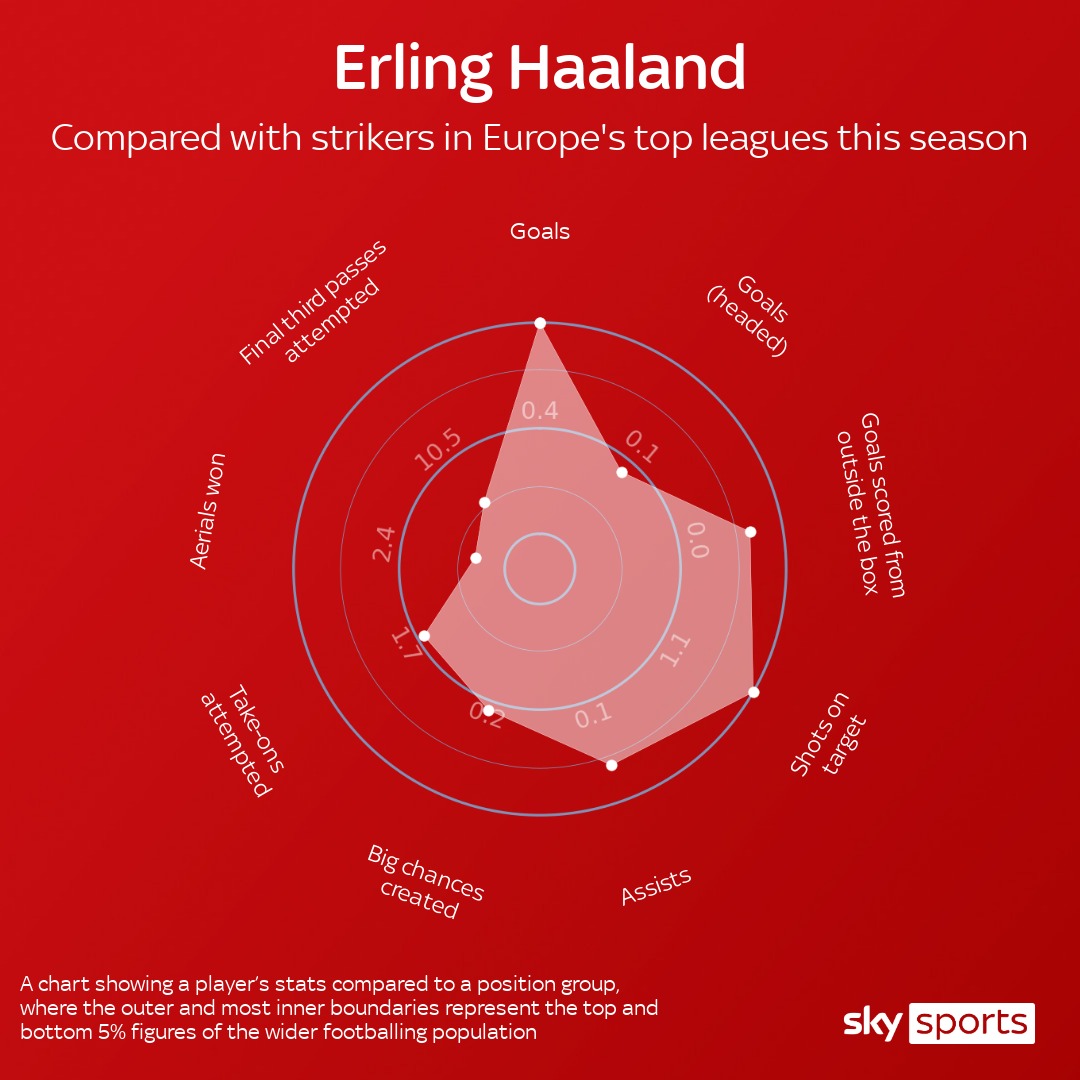 There are fewer hot properties around in world football than Haaland across any position, let alone as a forward. But Borussia Dortmund are languishing in fifth in the Bundesliga and the striker stormed off at the end of Saturday’s 2-2 draw at Koln, their latest poor result in a tough domestic season.

The 20-year-old has been linked with a move to Manchester United, Manchester City and Chelsea this summer – but are Dortmund willing to let him go?

Sky Sports News’ Dharmesh Sheth says: “When Haaland joined Borussia Dortmund from RB Salzburg in January 2020 for around £20m, the club’s strategy was to keep the player until at least the summer of 2022. That’s when Haaland’s release clause kicks in – a release clause believed to be around £65m.

“But such has been his form – Haaland has scored at the rate of a goal a game – could a departure this summer be on the cards?

“The positive in doing business in the next window for Dortmund is they can ask for what they want in terms of a transfer fee. Haaland is valued well in excess of £100m. However, the noises coming out of Germany indicate Jadon Sancho will be the big departure at Dortmund – not Haaland.

“That said, even though it is very unlikely Dortmund would allow both Sancho and Haaland to leave in the same window, it cannot be ruled out. Much will depend on whether Dortmund qualify for next season’s Champions League. If they don’t, both players may agitate for a move.

“Dortmund have big decisions to make. If they keep Haaland, then they will almost certainly lose out on a bigger transfer fee – though it should be remembered, they will still make a healthy profit from their original outlay.

“Erling Haaland will be a wanted man this summer – who wouldn’t want to sign him? But who will be able to afford him is the big question.”

Nothing much needs saying about Kane, one of the most recognisable strikers in Premier League history, and statistically one of the best. His goal in Tottenham’s 2-0 win at Aston Villa on Sunday took him on to 160 in his career, exactly 100 behind all-time top scorer Alan Shearer.

‘He’s got an all-round game and I personally think he’s the best centre-forward in the world, he’s the only player I know who has got the whole package,” ex-England midfielder Paul Merson said on Super Sunday.

‘People will go ‘oh, Haaland, he’s 20, he scores goals, that’s what he brings to the party’. Kane brings everything to the party.

“He’s got an array of passing, he can put people in, he can join the play. I can’t talk highly enough of the lad, I really can’t, he’s a special, special player.

“I’m not sure about him breaking Shearer’s record. At 30, 31 he’s still got to get 25 a season. He can play so much deeper and he’s a team player. He’s not someone like an Aguero who’s just going to sit in the box.” 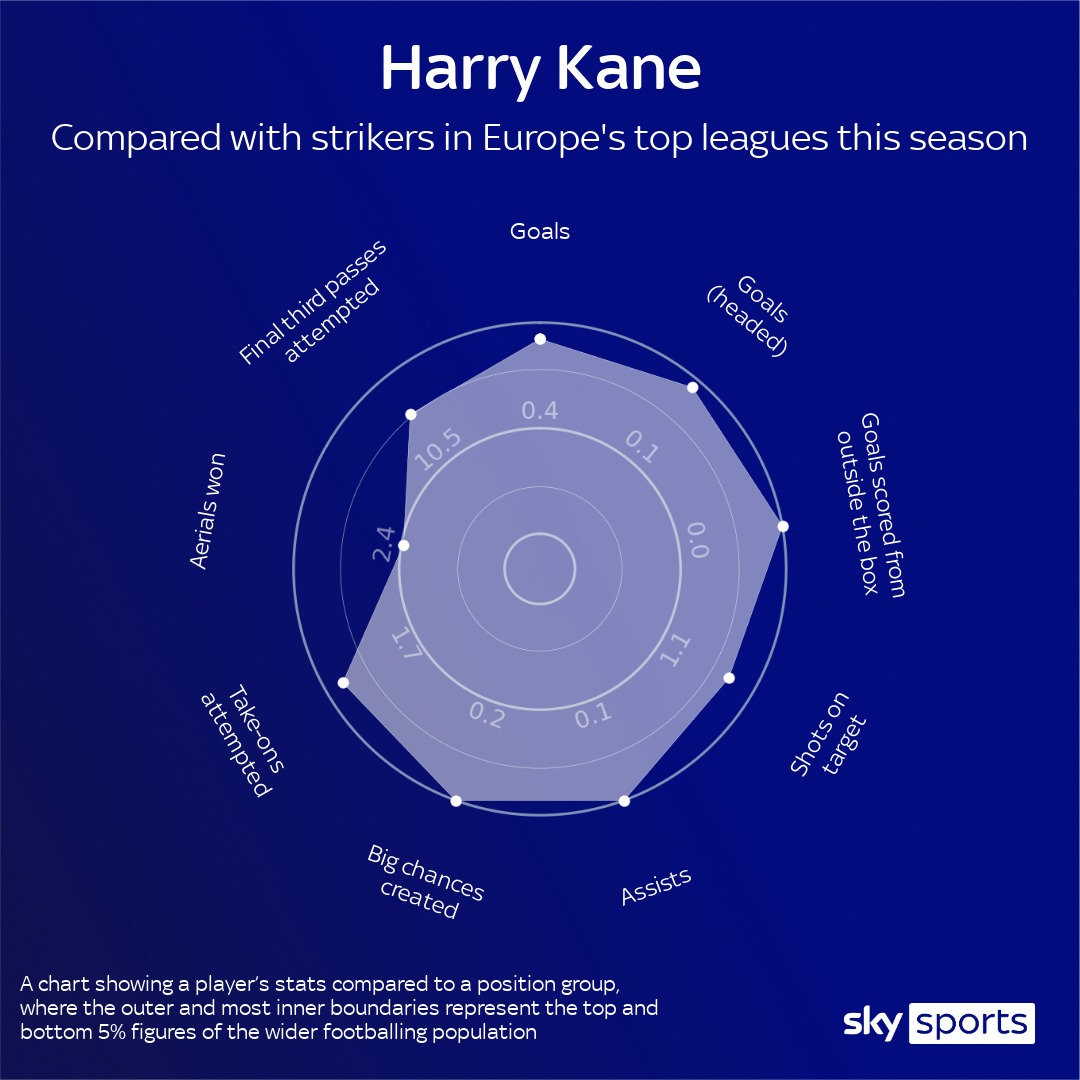 Kane will turn 28 this July, and should he remain at Tottenham he will be rapidly approaching 30 by the time the next summer transfer window comes around.

But having remained loyal to his boyhood club through good and bad so far, will he rebuff advances again to remain in north London?

“Kane is an ambitious man. He’s made no secret of the fact he wants to win medals. When asked if he can see himself staying at Tottenham for the rest of his career, he said: ‘It all depends on what happens as a team and how we progress as a team.’

“For their part, Tottenham are under no pressure to sell – Kane has over three years left on his contract. A potential Kane departure appears to come down to two things. A club coming in with an astronomical offer and Kane asking to go. If that was to happen, what will Tottenham do? Keep a player who doesn’t want to be there? Or cash in?

“Kane is 28 in July. These are the peak years of his career. And for all the goals, a major piece of silverware has so far eluded him. A chance to change that is upcoming – the League Cup final next month against Manchester City. Would winning that be enough to convince Kane the club is “progressing” in the way he wants. Or would it represent a parting gift?

“There are likely to be offers in the summer – but can any club afford the fee? Nobody has been immune to the impact the pandemic has had on finances.

“Talk of Kane’s future is heating up, though – Tottenham’s stunning Europa League exit served only to intensify that talk… the next two months will be crucial. Can Tottenham win a trophy? Can Tottenham finish in the top four? Will that be enough to satisfy Kane?

Manchester City are interested in a summer move for Southampton striker Danny Ings, while Everton’s Dominic Calvert-Lewin has been linked with a move to Manchester United.

Further afield, Andre Silva’s form for Frankfurt in the Bundesliga rivals even Haaland’s, with 21 goals in 24 league games, while Luka Jovic, who is back at the same club on loan from Real Madrid, is yet to fulfil his early potential.