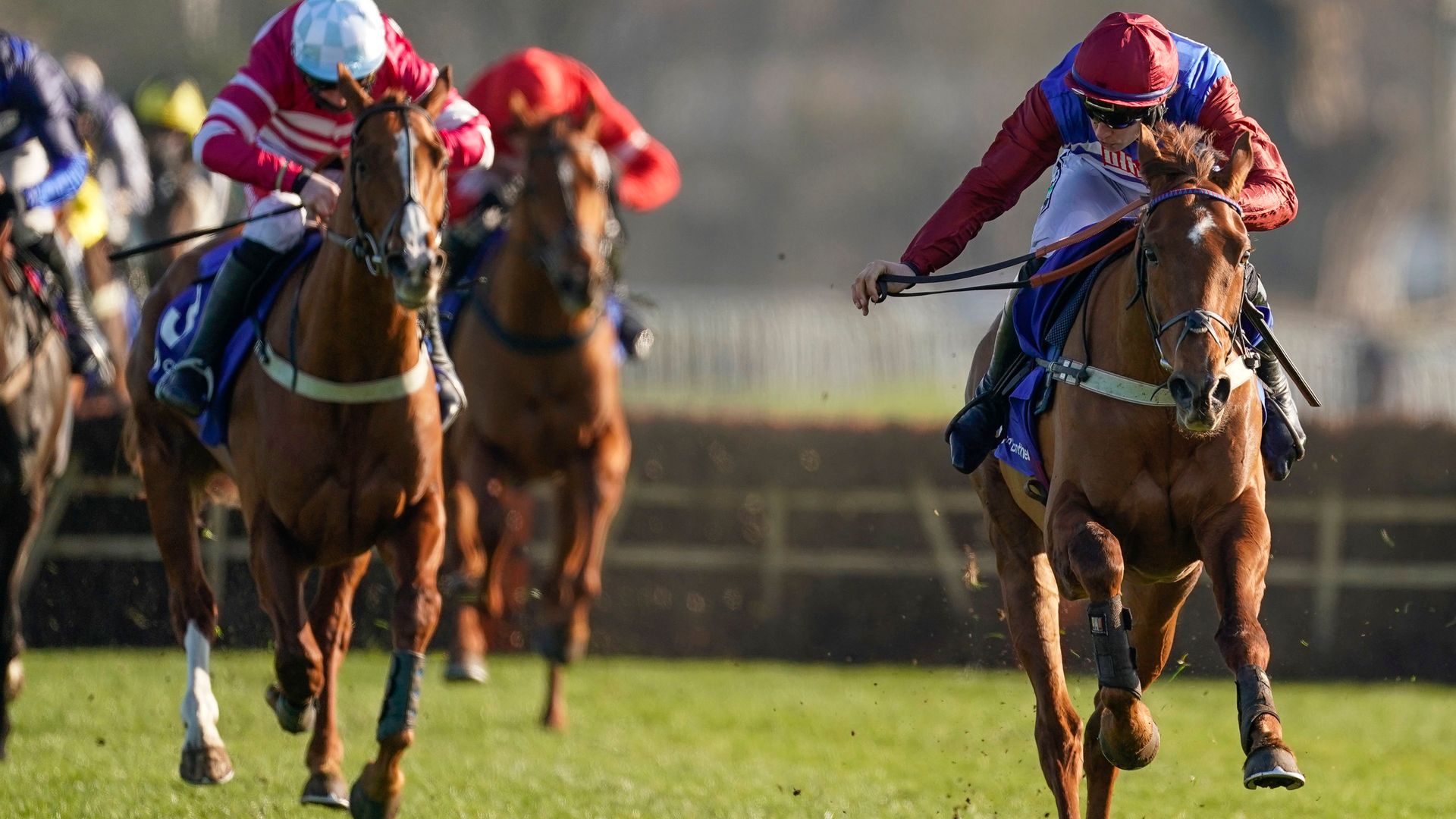 The four-year-old championship at the Festival had looked at the mercy of Gordon Elliott, who has an embarrassment of riches in the division with the first two in the betting in Zanahiyr and Quilixios, as well as the unbeaten Teahupoo, who won again at Fairyhouse on Saturday.

But Tritonic, more than useful on the Flat for Alan King and placed at Royal Ascot, has clearly taken to his new discipline very well.

A winner on his debut at Ascot when he only wore down Gary Moore’s Casa Loupi in the closing stages, the pair were first and second again – but this time Tritonic’s superiority was much greater.

Running to the last Tritonic was just a length in front, but by the time the 5-6 favourite crossed the line he had put 10 between them, with Adrian Heskin not being overly vigorous.

Betfair cut the winner to 5-1 from 8s for the Triumph – and King could hardly have been happier with the display.

The Barbury Castle Stables trainer said: “We wanted to get a bit more experience into him for Cheltenham and he will have learned plenty down the inside (rail) today. Once or twice he goes to sleep, but as soon as Adrian gives him a squeeze, he is straight back on the bridle. I could not have been more pleased with him.

“We gave him a proper holiday at the end of last Flat season – he was gelded and had six weeks in the field. He was only just ready to start at Ascot and I just felt we had to try to get two runs into him if we were going to have a serious Triumph horse.

“We were going to come straight here and I thought ‘well, that’s not right’, he just needs a little bit more experience. We certainly felt he had improved since Ascot, fitness-wise, and he has built on that again today.

“He is much the best of my former Triumph Hurdle horses on Flat ratings. We have trained him differently. Katchit we started back in September, the rest had a lot more experience than Tritonic has coming into the Triumph.

“But I think the two runs over hurdles will be enough and he has experience in big handicaps on the Flat.”

He added: “He is the highest-class Flat horse I’ve ever sent jumping. He is a good mile-and-a-quarter Flat horse. He might appear to be a little bit slow, but that is because he goes to sleep on you in a race. He only just does what he is asked.

“He should be fine for Cheltenham and he has the gears to hold a position wherever you want to ride him.

“Everything impressed me. The way he came back on the bridle. He was a bit short of room once or twice and I love the way he went away from the last as well. He hit the line really well, which is always a good sign.

“From day one he has schooled lovely. I thought today his jumping was accurate and he’s good when he is in tight as well.

“I don’t think he will come on much fitness-wise, but he will just be a little bit sharper for this experience.

“I hope he’d have a very good chance at Cheltenham. He’d be the highest-rated Flat-wise and I certainly wouldn’t be one to swap him for anything. I’m very happy with my lad.”